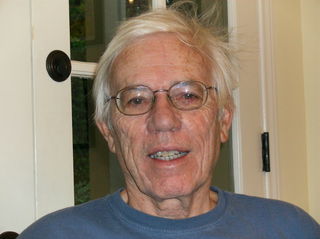 THE ABSCONDER
Chris spent 28 years in prison for a murder he didn't commit. When a minor parole violation threatens to send him back inside for life, he goes on the run.
THE TRUCKERS.
Tommy’s re-election to the presidency of THE TRUCKERS could mean the rebirth of the American labor movement.

THE HERO
What makes a hero?

OOOEELIE
The Oooeelie Myth: A dog, the reincarnation of a canine being whose space ship crash-landed on earth tens of thousands of years ago and taught humans to speak, is still trying to find his way home to Sirius in the Twentieth Century.
THE JYNX
THE JYNX is a novel of clamming, art, Swiftboat politics, and revenge in the age of Karl Rove.
THE DREAM DANCER
THE DREAM DANCER: A Native American hero’s journey in which the monster is a U.S. Congressman and the netherworld is a Pennsylvania prison.

Writing novels is my passion, a process started back in the late 1950s after I got out of the Army and into journalism.

My first novel, ONCE TO EVERY MAN, finished in 1963 shortly after I arrived at Newsday, got me my first agent. He didn't try to sell the novel, but urged me to keep writing and to send him my future work. He didn't like my next novel, THE COP, at all.

In 1968, I became a member of Newsday's first investigative reporting team, whose work went on to win the 1970 Pulitzer Prize Gold Medal. During that period another agent took me on as a client after reading my novel, KINZUA. She loved it, tried to sell it and failed.

During the summer of Watergate hearings in 1973, I was assigned to Newsday's Washington bureau to come up original investigative stories about the misdeeds of the Nixon Administration. One of the best stories I produced was the revelation that the Shah of Iran and the then Deputy Secretary of Defense were involved in a $100 million investment deal. My interest in foreign investment was piqued. That fall I won an Alicia Patterson Fellowship to spend a year examining foreign investment in the United States. The research taking me through Europe and the Middle East led to the writing of my first published book, AMERICA FOR SALE.

For the next decade, I researched and worked on an historical novel based on the experiences of war correspondent Januarius A. MacGahan covering the Paris Commune of 1871. I went through several versions of this novel, all rejected by my agent. But I learned a lot in the process and spent a month doing research in Paris, living in a little hotel on the Left Bank, and having a wonderful time.

In 1976, Newsday had assigned me to cover organized labor, a subject that came to fascinate me. Eventually that led to the writing and publication of my second nonfiction book, COLLISION, in 1993. Right after that book, I produced another novel, OOOEELIE, THE DOG WHO TAUGHT MAN TO SPEAK. My agent loved it. Six publishers expressed an interest and the book was put out to bid. None bid. Another unpublished novel to my credit.

My agent suggested I stick to nonfiction. I decided to keep pursuing my dream, and besides, I had learned to write novels. She eventually dumped me.

In 1999, I retired from Newsday, freeing me to focus on my own writing. Since leaving journalism, I write four hours on four days a week. I am fulfilling my hunger to write novels. Missing from the mix was someone willing to publish my novels. I assumed that eventually I would die and my manuscripts would be preserved by my son, Ken, perhaps on a book shelf, perhaps in a closet. Then as the cycle of life went on, he would die and the manuscripts would be dropped by a more distant relative into the garbage bin. AND THEN!

And then, my grandson, Reeves, gave me a birthday present that I never expected last year. He arranged to put my novel, THE DREAM DANCER, (by the way the best thing I've written to date) on WordPress as a free online novel. That became one of the major conscious-raising experiences of my writing life. I was plunged into a new world filled by writers like me who were unable to find agents to represent them or traditional publishers to produce and sell their works.

Last fall, I entered my latest novel, THE JYNX, in the Amazon Breakthrough Novel Award contest, making the first cut to the semi-finals. I didn't win the grand prize, but being a semi-finalist prompted me to take advantage of Amazon's offer to publish my book through CreateSpace and to put the book on Amazon's Kindle. So finally I have a book available in paperback (on Amazon.com) and as an ebook on Amazon's Kindle and on Smashwords.

I'm still writing and I assume you are still reading if you reached this point in my narrative.